Endoscopic sinus surgery
Endoscopic sinus surgery is a procedure designed to enlarge the natural drainage pathways of the sinuses to restore their function and health. In chronic sinusitis, the sinuses are unable to drain adequately due to inflammation of the narrow drainage pathways. As a result, nasal secretions can become trapped in the sinuses and become chronically infected. The goal of surgery is to carefully remove the thin, delicate bone and mucous membranes that block the drainage pathways of the sinuses. The term “endoscopic” refers to the use of small fiber optic telescopes that allow the surgery to be performed through the nostrils, without the need for any external skin incisions. 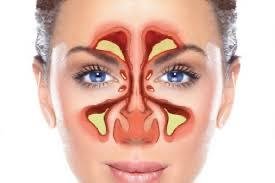 The operation
Functional endoscopic sinus surgery is performed in hospital, usually under a general anaesthetic but can be performed with local anaesthesia and intravenous sedation.
Using fine endoscopes and high-definition cameras it is possible to obtain an excellent view. The area that most frequently needs to be dealt with is called the ostiomeatal unit. It is an area on the sidewall of the nose where many of the sinuses drain. By removing a small amount of bone in this area improved ventilation and drainage can usually be achieved. Not infrequently there are anatomical variations in this area that make people prone to sinus disease. These can be readily corrected at surgery. In more extensive sinus disease there may be a need to operate on other sinuses such as the sphenoid and frontal sinuses.
Not infrequently this surgery will be performed in conjunction with Septoplasty or Turbinate Surgery.
A light pack may be placed in the nose at the end of surgery to help with bleeding. 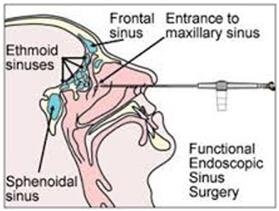 Preparing for Endoscopic Sinus Surgery
What do I need to know before having endoscopic sinus surgery?
• Preoperative prescriptions: Prior to surgery your doctor will most likely prescribe several medications that help reduce inflammation. It is important to follow your doctor's instructions and start the medications at the appropriate times before and after surgery.
• Preoperative physical: Your surgeon will require you to get medical clearance from anaesthetist before surgery. This will require basic lab tests (CBC, LFT, KFT, Chest X-ray, ECG, coagulation profile, Serology test) and studies (CT scan PNS), and anaesthetist may want additional tests. This ensures that you have medical clearance for a safe surgery.
• Smoking: Smoking causes increased scar tissue and poor healing that leads to failure of endoscopic sinus surgery. If you do smoke your surgeon will usually require you to stop smoking 3-4 weeks before surgery and avoid smoking for an additional month after surgery.
• What to avoid before surgery: Certain medications increase your risk of bleeding during and after sinus surgery. These medications include aspirin and NSAIDs. These should be stopped at least 2 weeks prior to surgery. Vitamins E and herbal medicines such as gingko biloba, ginseng, and garlic tablets can also increase your risk of bleeding and should be stopped prior to surgery. Anti-coagulation medicines are blood thinning medications that must also be temporarily stopped before and after surgery.
• Recommended over-the-counter medications: We recommend that you purchase two over-the-counter medications prior to your surgery. Nasal saline mist (Ayr, Ocean, Simple Saline) can be used every 3-4 hours after surgery to keep your nose moist and humidified. Afrin should be used after surgery if you have steady bleeding that doesn’t stop with a gentle head tilt. Both of these medications can be purchased at any pharmacy without a prescription and are good to have for after your surgery.

What can I expect on my surgery day?
• You will not be allowed to eat or drink anything after midnight before your day of surgery. Your doctor will tell you which medications you can take the morning of the surgery, but these should be taken with very small sips of water. The anesthesiologists cannot put you to sleep safely unless you have an empty stomach, and therefore they will cancel surgery if you’ve had anything to eat or drink.
• Sinus surgery is performed with general anesthesia or local anaesthesia with IV sedation. After surgery you will spend a few hours in a recovery room. Most patients feel good enough to go home next day after their surgery with nasal pack.

What are the risks of endoscopic sinus surgery?
As with any surgery there are risks involved with having endoscopic sinus surgery. While risks with sinus surgery are exceedingly rare, it is important for you to understand what these are.
• Bleeding: During surgery small amounts of blood loss are expected and these are tolerated well by patients. In rare cases excessive bleeding may occur that requires stopping the surgical procedure. Mild bleeding after surgery is also common and usually subsides after the first day. Rarely bleeding occurs after surgery that requires a visit to your surgeon and may involve placement of nasal packing to stop the bleeding.
• Infection: Patients are usually given a dose of antibiotics during surgery and a prescription for antibiotics after surgery to reduce this risk. Occasionally, patient may develop infection after surgery that requires a stronger antibiotic.
• Cerebrospinal fluid (CSF) leak: During endoscopic sinus surgery the surgeon is working beneath the bone that separates the brain from the nose. It is extremely rare for this bone to be injured during sinus surgery, which would result in a CSF leak. Such an injury would generally be identified at the time it occurred and would be repaired immediately. If a leak is diagnosed after surgery, as second procedure would be required to patch the opening. Failure to treat a CSF leak could result in meningitis, a potentially life-threatening infection.
• Changes in vision: The sinuses are very close to the eyes, and therefore injury to the eyes may occur during sinus surgery resulting in temporary or permanent double vision or visual changes. Injury to the tear ducts may also cause excessive tearing after surgery. Fortunately, these are exceedingly rare complications. Swelling may also occur around the eyes after surgery. Temporary blurry vision does occur in some patients but resolves without the need for further treatment.
• Other risks include changes in your nasal breathing or sense of smell. If a septoplasty is performed during your sinus surgery, there is a small risk of developing a septal perforation or numbness in your teeth.
• Some patients have persistent or recurrent sinus disease after surgery that requires treatment with antibiotics, steroids, or another surgery.

Post-Operative Instructions
What to Expect After Endoscopic Sinus Surgery:
• Bleeding: It is normal to have some bloody discharge for the first 3-5 days after sinus surgery, especially after you irrigate your sinuses. If steady bleeding occurs after surgery, tilt your head back slightly and breathe through your nose gently. You may dab your nose with tissue but avoid any nose blowing. If steady nasal bleeding persists then you should contact emergency.
• Pain: You should expect some nasal and sinus pressure and pain for the first several days after surgery. This may feel like a sinus infection or a dull ache in your sinuses. You should use the post-operative pain medication prescribed by your doctor.
• Fatigue: You can expect to feel very tired for the first week after surgery. This is normal and most patients plan on taking at least 1 week off of work to recover. Every patient is different and some return to work sooner.
• Nasal congestion and discharge: You will have nasal congestion and discharge for the first few weeks after surgery. Your nasal passage and breathing should return to normal 2-3 weeks after surgery.
• Postoperative visits: You will have a certain number of postoperative visits depending on what surgery you have. During these visits we will clean your nose and sinuses of fluid and blood left behind after surgery. These visits are very important to aid the healing process so it is essential that you attend all those scheduled for you. There is some discomfort involved with the cleaning so it is best to take a pain medication 45 minutes before your visit.

What to Avoid After Endoscopic Sinus Surgery: • Nose Blowing and Straining: You should avoid straining, heavy lifting (> 20 lbs) and nose blowing for at least 10 days after surgery. Straining or nose blowing soon after surgery may cause bleeding. You can resume your normal routine 2 weeks after surgery.
• Aspirin: should be stopped 2 weeks prior to surgery. Aspirin may cause bleeding and should be avoided for 2 weeks after surgery.
• Steroid Nasal Sprays: If you were taking nasal steroid sprays prior to surgery you should avoid using these for at least 2 weeks after sinus surgery to allow the lining of the nose and sinuses to heal. Your doctor will tell you when it is safe to restart this medicine. 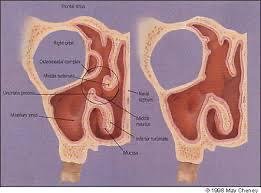 Balloon sinuplasty is a type of endoscopic nasal surgery. It uses small balloon catheters that inflate to drain the large nasal sinuses. Balloon sinuplasty is typically used to treat cases of severe rhinosinusitis or sinus inflammation and blockage in the nose.
The procedure was adapted from angioplasty, where balloon catheters are used to dilate damaged or congested blood vessels near the heart. Balloon sinuplasty, as with all sinuplasty surgeries, is considered extremely effective in reducing symptoms of rhinosinusitis. When combined with an intraoperative navigation guidance system, the complication rates reduce to a minimum. This displays a visual map of your sinus anatomy to the doctor. It works like GPS in a car or phone — to help guide and place the balloon device.
During the minimally invasive surgery, this navigation technology helps the doctor to precisely steer the balloon to the place where your sinuses are blocked.
The procedure is minimally invasive, involves no cutting or loss of nasal tissues or bone, and has a short recovery time. Balloon sinuplasty works by dilating the openings of some or all three of the major nasal sinuses. This enables them to be cleared and drained.
Most people who need the surgery have a condition that leads to the sinus membranes becoming inflamed, preventing drainage of mucus, pus, and discharge, and causing congestion. A balloon sinuplasty procedure may help to ease the symptoms of chronic sinusitis.
Since its introduction in the mid-2000s, balloon sinuplasty has become one of the most commonly performed types of sinus surgeries. This popularity is because it is associated with such high rates of success and low risks of complications.
Benefits of balloon sinuplasty over traditional endoscopic sinus surgeries include:
• lower risk of bleeding.
• shorter office, clinic, or hospital stay and much faster recovery time.
• no intended damage or removal of sinus tissues, structures, mucous membranes, nasal bones or sinus cartilage.
• fewer required post-operative appointments or need to inspect stitches or sutures.
• reduced need for the use of operative and post-operative pain medications.
• reduced need for general anaesthesia and lower risk of adverse reaction to it.
• reduced risk of post-operative infection.
• reduced risk of unintentional tissue or structure damage.
• reduced risk of scarring and continued inflammation.
Balloon sinuplasty is a low-risk procedure that has positive results for almost all patients. The procedure may be done using general or local anaesthesia. After administering either form of anaesthesia, a doctor inserts an endoscope, once the entrance to the cavity is reached, the doctor will slowly advance a small balloon catheter over the guiding endoscope wire.
When the balloon catheter is correctly positioned inside the nasal passage and cavity, it will be slowly inflated and pressed against the sinus walls, to fracture the bone slightly and force an opening. Once the balloon is fully inflated, mucus or pus will be flushed out from the cavities. Finally, the balloon is removed, and the sinus is left to continue to drain naturally. 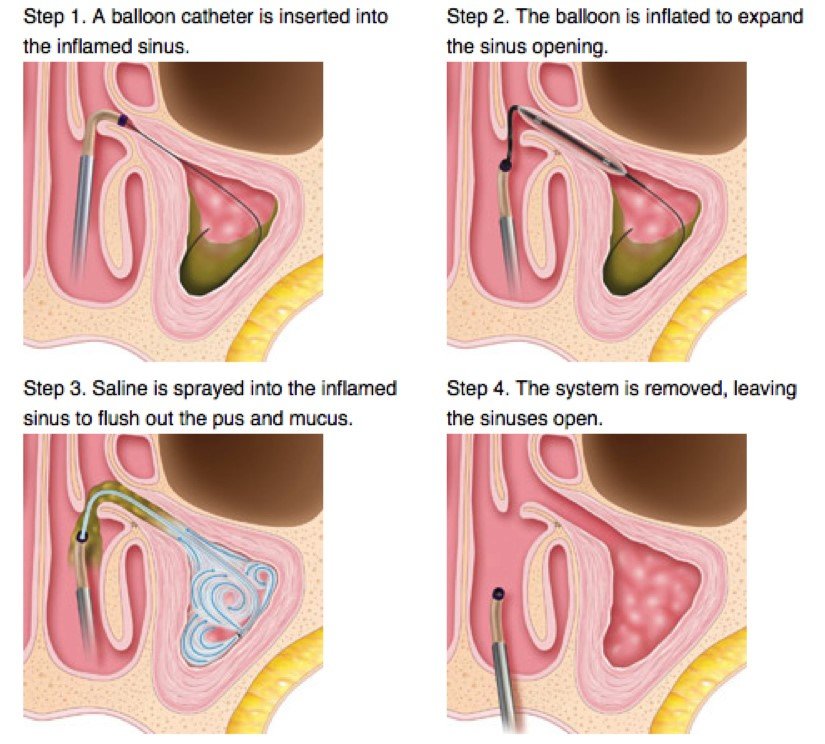